The Crit;
During the progress crit I proposed that I will be looking into creative packaging, further looking into how it has been developed through time, so how it have evolved. I got to this subject from looking at Farrow’s creative CD packaging. I started looking further into creative packing and the tone of voice, which is used when applying it to its audience and context. 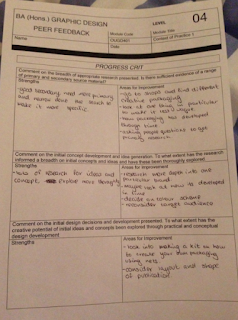 Looking at the feedback I got from my peers I found that I will need to start looking into something more specific rather than just general creative packaging. Therefore I decided that I would change my publication to be one about a specific brand, and see how the packaging has developed in time, also showing why they have been developed, and why they look that way, considering cultural and social influences.
I also wanted to make a kit, so that my audience would be able to create the packaging themselves, and I found that I needed to experiment more with this, also look into a specific brand first.
My group suggested that I should to consider audience, layout and the shape of my publication. I will take everything that was said in the crit and work on sorting these things out.
Posted by Daisy at 17:34 No comments:

Email ThisBlogThis!Share to TwitterShare to FacebookShare to Pinterest
Labels: OUGD401

10 Things You Need To Know About Graphic Design

Initial research;
When looking into 10 things you need to know about graphic design I started by going on google and seeing what came up when I typed it in. This allowed me to find different websites about what people think you should know as a graphic designer.

These are some of the websites which I found, and they weren't very useful and I didn't agree with them. Therefore I decided to go through my blog and find the things which I have learnt throughout being on this course and throughout design principles.