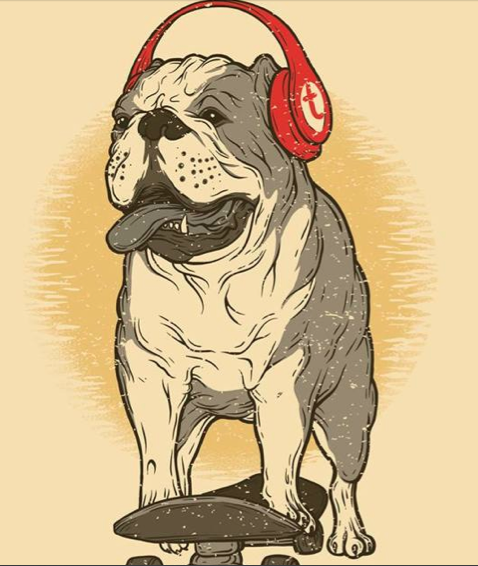 From this research I have looked at many different types of illustrations of bulldogs to narrow down what I want to do, and how it will look. I have decided that I want the illustration to be a vector drawing, using minimal colours. I also want it to be quite detailed so that the audience can see where one thing stops, and something else begins.
Posted by Daisy at 04:54 No comments:

Cath Kidston Prints.
I like Cath Kidston and do buy their products occasionally, although I thought that I would look through the current Cath Kidston surface patterns so that I can see the current aesthetic of the designs. The brief stated that they want to keep the print the similar to the current style of their prints, therefore I need to follow a similar aesthetic. The brief is asking for a very specific audience 'but not too specific', what I got out from the brief was that they are looking for something to do with being British, and moving away from the same designs that have already been produced.

This print has been created in a different way to the other flower print. It is made up of more block colours and more vibrant colours. This is different because of the birds in the design, although I think that I would like to move even further away from the floral theme by not including it at all.

This is a very good example of a British print, it is showing everything that is stereotypically British. This is something that I am aiming to do, I want people to look at my design and think about Britain. The illustrations have been done really well, it is clear what each thing is.

What I like about this design is how it is brighter than the rest of the designs that Cath Kidston do. A lot of the other prints use quite muted and neutral colours, which I think works well but I also think that it is good to have a range of different styles. The repeated pattern uses four different main illustrations and smaller illustrations running through it, this makes the print flow better.

This print also includes different illustrations and steps them out. This is something I need to consider when making my print, how they are all going to link together to create a repeated pattern, as the current prints works really well.

Cath Kidston is animal friendly, as I have seen that there are a few prints that have animals in them. The target audience that the brief gives communicated to me that she is an animal friendly person, therefore this would work well for their audience. Although some of the colours used in this print aren't accurate for the animals, I think that they work well together.
Posted by Daisy at 06:54 No comments: