I got many different newspapers for this brief, so hat I had a wider range of articles I could choose. I got the Metro, i, The Sun and Daily Express. I found a few different articles to look at.

First thought;
Looking into the Jimmy Savile story I found that it was a bit too Shocking for me to research for a long time, as I knew that we would be using our research brief to develop upon. Therefore I thought I should use a lighter article, as for this brief I can choose my own.

Second thought;
Then I thought about looking into the James Bond stories, as there are many different tangents to these stories. I found three different James Bond stories in different newspapers; product placement in the Bond films, Daniel Craig's age as James Bond and the Bond girls. I found that there were a lot of different approaches to this article, but then saw that many people were doing this so decided to find something else but on the same route.

I then found a light article in the sun about celebreties breaking up and then making up so decided to look further into that.


I then looked at websites to find more about these couples and found a lot of information about them all on many different websites.

Research form the sun article;
NOT all celebrity relationships are plain sailing – but for every couple who call it a day, there’s another pair that work through their problems.
KRISTEN STEWART and ROBERT PATTINSON have reconciled after she cheated with director RUPERT SANDERS.
And RIHANNA has rekindled her romance with CHRIS BROWN three years after he was found guilty of assaulting the singer.
Here we look at the stars who have realised the course of true love doesn’t always run smoothly.

ROBERT PATTINSON AND KRISTEN STEWART
Started dating in 2008, split in July, back together this month
The pair split this year after Kristen was photographed kissing Snow White director RUPERT SANDERS.
After admitting to her “momentary indiscretion” Robert ended their relationship. But the couple were photographed together again for the first time last week.


MEGAN FOX AND BRIAN AUSTIN GREEN
Started dating in 2004, split in 2009, married in 2010
Actress Megan and US TV star Brian wed in June 2010.
But rumours they had split briefly in 2009 were confirmed when she was seen without her engagement ring.
The pair have just had a son, NOAH

JUSTIN TIMBERLAKE AND JESSICA BIEL
Started dating in 2007, split in 2011 and now just married
Justin and Jessica announced their split four years after first getting together.
After only three months apart, they couldn’t keep away from each other and married on Friday.
He really did bring the sexy back.


RIHANNA AND CHRIS BROWN
Started dating in 2008, split in 2009, reunited this month
Chris and Rih broke up in 2009 after he assaulted her, leaving her with a badly bruised face.
The couple have now reunited, seemingly while Chris was still with girlfriend KARRUECHE TRAN.
Rih and Chris were seen kissing at a nightclub over the weekend.

PINK AND CAREY HART
Married in 2006, split in 2008, reunited in 2009
Pink and Carey have had a rocky romance, separating just two years after tying the knot.
Pink made it clear they had hit a rough patch when she released So What and U + Ur Hand.
Still, they got back together and they now have a daughter, WILLOW SAGE.

PRINCE WILLIAM AND KATE MIDDLETON
Met in 2001, split in 2007, reunited later in 2007
Even royals have troubles in love.
The couple split in April 2007 saying they had grown apart, but just three months later the Prince persuaded Kate to try again.
The whole nation celebrated when they married last year.

Barely a week goes by without a celebrity couple announcing their 'separation'. But often, the news of a celebrity separation is just a polite way of saying that they're on non-speaking terms and their relationship has totally broken down beyond repair.
However, in the real world, a separation need not signify the end, but the start of a healing process - a positive move towards saving a relationship that has hit the rocks.
http://www.ivillage.co.uk/break-make/82289

More websites for research of the history of each couple;
http://www.x17online.com/celebrities/chris_brown/exclusive_photos_-_chris_brown_and_nicole_sc.php

After the crit, furter research;
Getting more newspapers and magazines such as; Now, Reveal and Closer. 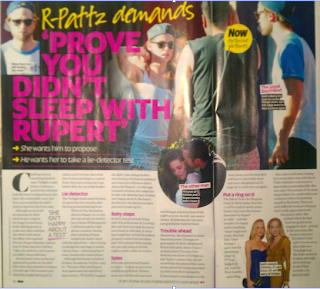 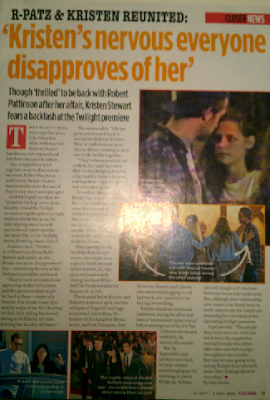 Finding mostly information and Kristen and Rob's story I thought to look it up more and found youtube clips about it being a fake relationship, also lots of stories about it.