Task 4 - The Gaze and the Media 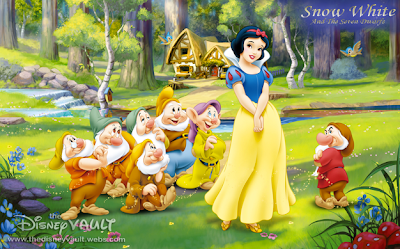 When it comes to ideologies of men and women, women are seen to be the focus of an image, looking away from the audience/camera or looking back suggestively, allowing men to look back at them without being challenged, so they can look for as long as they please. "While I don't wish to suggest there's an intrinsically male way of making images, there can be little doubt that entertainment as we know it is crucially predicated on a masculine investigation of women, and a circulation of women's images for men."(Coward, R. 2000. 33) Coward is suggesting that because the images are produced by men, it is the way they see things, therefore it is produced for other men to gaze upon at their will.

I have found that women are also very influenced by images of other women, it all comes down to what is seen as 'perfect' in society. For example, Snow White, someone that seems so innocent has a huge impact on society, in this image she is looking at the audience showing the desire she has around her, and almost flirting with the camera in the way her body language is. Snow white is living life just waiting for her prince charming to come and find her, a lot like women in society, although the image of snow white being the 'fairest of them all' sends a message that you will only find your 'prince charming' if you are aesthetically pleasing to men. This is supported by Coward as he says "women are bound to this power precisely because visual impressions have been elevated to the position of holding the key to our psychic well-being, our social success, and indeed to whether or not we will be loved."(Coward, R. 2000. 34) this is showing that women need to be loved, they feel that if they are loved in life, they will be successful.

Not only women but young girls are influenced by this idea from a young age, watching films such as Snow White, which is just telling small children that the better you look the easier it is to be successful in life and find your 'one true love'. "It has been suggested that all children pass through a narcissistic phase where they become entranced by their own self-image."(Coward, R. 2000. 36) this is known as the mirror stage, where children start seeing themselves "a unified identity"(Coward, R. 2000. 36). At this stage in life they will be subliminally taking what is taught in fairy tails such as Snow White and applying them in life. Starting from a young age society makes girls/women believe that they should look a certain way, and women find themselves forever trying to get to this ideal version of themselves but will never fully get there as there is always something they can change about themselves as Coward supports "Women's relation to their own self-image is much more likely to be dominated by discontent...'I'm not attractive enough'"(Coward, R. 2000. 37).
Posted by Daisy at 02:50